The Theme for Week 13 (Mar 29-Apr 4) is Music.  Yes, I skipped a couple of weeks/challenges.  Part of the beauty of this series is we can join in when we can.

My family was not the ones who gathered around the piano and sang songs together.  There was no one in my immediate family trying to make it in the music business.  I mean music was a part of our lives.  I'm not sure there is anyone on this planet who could avoid music.

I've told the story of my paternal grandmother, Nealie Drake Tapley, who played the organ at Powell's Chapel Church in Johnson County, Georgia, and how she would drive her horse and buggy more than 8 miles each way on Sunday mornings to play there.

My mother plays the piano.  I took five years of lessons.  It was not my favorite thing, and I do not play very well today.  I've always said that my mother tricked me.  I told her I wanted to learn to play the guitar, and she told me I had to  start with the piano, to get the basics of playing music, so to speak.  I don't know if that was true or not, but I did the piano lessons and never got to guitar lessons!

My father was a country music fan.  He passed that along to me.  I grew up in the 1970s listening to Daddy's 8 track tapes of Hank Williams, Loretta Lynn and more.  I loved Charlie Rich, Charley Pride, Brenda Lee, and Tammy Wynette.  And of course I know every word to "Harper Valley PTA" by Jeannie C. Riley.  My father's favorite song was "Satin Sheets" by Jeanne Pruett.

My mother also instilled the love of show tunes.  We had the album of the soundtrack of My Fair Lady, and I would belt out the song "Just You Wait (Henry Higgins)" on Saturday afternoons.

As I got older (into my teen years), of course I discovered rock 'n roll.  I loved Chicago and Foreigner.  In the 1980s, I loved the big hair bands:  Bon Jovi, Whitesnake, and Poison.

Nowadays, I still love country music.  But I also alternate between it, rock and pop music.  I think my tastes are quite eclectic.  (Though I do not enjoy opera.)

During my ongoing search of relatives, I did come across a cousin who was an actual country musician in Nashville! 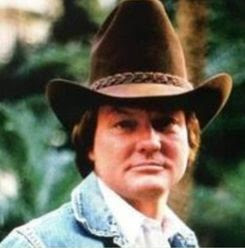 So I decided to do some research into his career.  I could not find much.  Here's what I did find on AirPlayDirect.com:

"Clayton Claxton, singer, songwriter, and entertainer, since he was 12 years old, loves to be in front of people. With his band, RODE WEST, they play stomp down Country music their own way, wherever they are called to play.  Impressionist, humorist, and songwriter, he has fronted shows for major Country stars for years.  Having his own #1 record in Australia and chart records in the USA, Clayton worked on the world famous GRAND OLE OPRY for 22 years.  The guys in the RODE WEST BAND have been with Clayton for over 20 years, one being his son, the lead guitar player. They do a family show that everyone can enjoy. They do some fifty's music, they do some old Cowboy harmony songs from yesteryear, and they bring the Grand Ole Opry to the stage with impersonations."

He had an excellent, traditional voice. Here's another one that seemed to have been popular in Australia:

So this is my closest brush with an actual country music star, and I never even got to meet him!