The Journey Through Hallowed Ground, Day 2

Today was a long and busy day... especially since I didn't feel well. Being sick when you're away from home is the worst.

Our first stop this morning was breakfast. Must have fuel to be a tourist for the day! Then we headed out to Thomas Jefferson's Monticello. From the brochure:

You must purchased timed tickets to tour Monticello. We purchased tickets online for 11am since the web site explained that we need to arrive one hour ahead of our ticket time in order to watch a film and take a shuttle up to the house. So we arrived promptly at 10am. When we picked up our tickets, they had openings in the 10:30 time slot, so they moved us up. That's great except we don't have time to watch the film! Oh well. We took a quick pic of Mom with Mr. Jefferson: 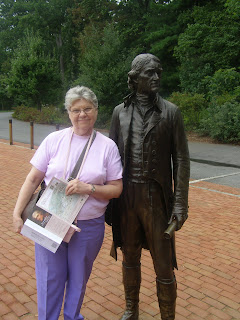 And then hopped on the shuttle bus... for all of five minutes. That's really how long the trip is to the house. The trick is that it's uphill. It's quite mountainous here. So the shuttle bus is a good move.

We had a few minutes before our tour time, so we looked around the gardens. I was interested to see that Monticello have archeologists on staff: 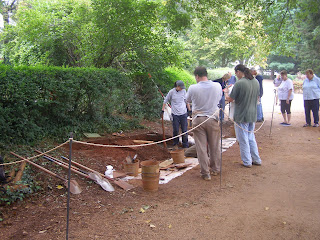 They are excavating along Mulberry Row, which was a very busy area where woodworkers, blacksmiths, and other artisans worked during the years that Jefferson had the plantation. The archeologists are trying to find proof of how the workers lived during that time, what kinds of tools they used, what the buildings were like, etc. Over the next few years, the staff plans to recreate some of the buildings and landscape in this area for visitors to see.

Promptly at 10:30, we were taken to the house and met Harriett, our tour guide. Harriett was very knowledgeable about Thomas Jefferson and the house; we didn't ask her a question that she couldn't answer. Jefferson never met a subject he wasn't interested in. He taught himself architecture from a book and is considered the "Father of Architecture"; he read in 7 languages: English, Olde English, Italian, French, Latin, Spanish, and Greek; he kept weather information for 50 years and is considered the "Father of Meteorology"; he was constantly designing gadgets to improve people's lives; and of course, he was very active in politics and was the author of what is undoubtedly our country's greatest document: The Declaration of Independence!!! I do not believe they make them like him anymore!

His house is an architectural marvel with octagon-shaped rooms; many, many windows in order to make it look the outside comes inside; and the Dome Room. The plantation itself is covered with many different kinds of beautiful flowers and a very large and diverse vegetable garden. 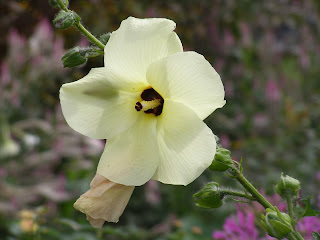 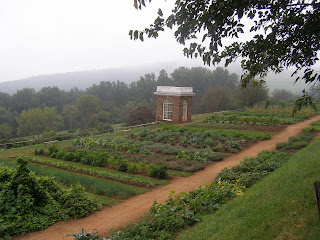 After the house tour, we took a garden tour, also. Jefferson was very hands on at the plantation... for at least the last 17 years of his life. For the 40 years before that, he was very hands on with serving this country. 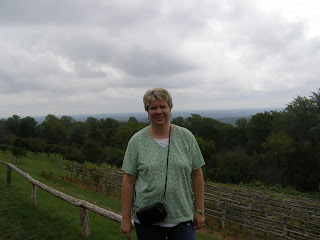 After purchasing some postcards and a magnet at the Gift Shop, we walked down the mountain (it was quite steep) to view Jefferson's grave. It is located in a private cemetery on the property that is owned by his descendants. 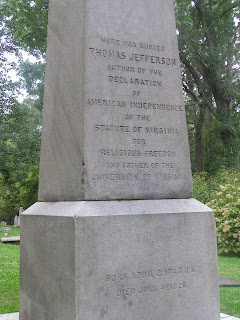 Jefferson wrote his own epitaph, and you will note that for all of his accomplishments, writing the Declaration of Independence, writing the Statute of Virginia for Religious Freedom, and being the Father of the University of Virginia were the only three he wanted included on his grave stone. Jefferson was 83 years old when he passed away on July 4, 1826; exactly 50 years to the day that the Declaration of Independence was signed.

Mom and I walked on down the mountain to the parking lot rather than take the 5 minute shuttle ride. Then we got to watch the 20 minute film that we were supposed to watch BEFORE we took the house tour. It was informative, all the same.

We left Monticello and drove 1/4 mile back toward Charlottesville to the Michie Tavern for lunch and a tour. The lunch, held in what they call "The Ordinary," is in 18th century style with pewter plates and cups, benches to sit on, and the hostess and servers dressed in period costume. The menu included mashed potatoes and gravy, green beans, coleslaw, black-eyed peas, fried and baked chicken, BBQ pork, biscuits, and cornbread. Drinks and desserts were extra. It was outrageously priced but the food was good, and the atmosphere was neat. 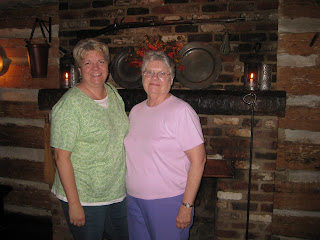 After eating, we toured the Tavern and learned how to play a dice game called "Shut the Box." We also learned how to dance the Virginia Reel! That was the most fun I had all day!

About 3 pm, we left the Tavern and continued to Ash Lawn Highland, the plantation once owned by our fifth president, James Monroe. Mom and I knew very little about Monroe, so the information provided on the tour was fascinating. Monroe purchased that plantation to be next to his good friend, Thomas Jefferson. There was a 2.5 mile path between the two plantations - a 20 minute ride on horseback. Unfortunately, Monroe had to sell the place in 1823 when he and his wife realized that her health prevented her from retiring there. The plantation is now owned by William and Mary University, which was Monroe's alma mater. They have been able to obtain many authentic pieces of furniture and household items that belonged to James and Elizabeth Monroe from their descendants. This plantation is absolutely beautiful and peaceful, with a long drive that looks just like you would imagine the winding roads of Virginia to look like. 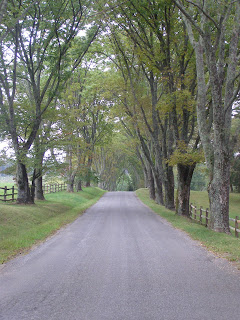 The house is no where as elaborate as Monticello, but the property is breathtaking. 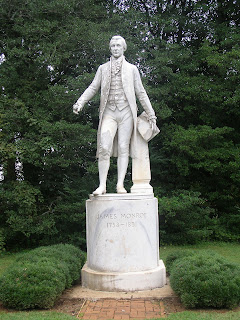 After a stop at the gift shop and purchasing a couple MORE magnets, Mom and I headed back to Charlottesville and our motel. I really didn't feel well by this time. We ordered in pizza and rested this evening. Tomorrow is not quite as busy. We will tour James Madison's home, Montpelier, and travel to Manassas.
Posted by Liz at 7:47 PM