The topic for this week really threw me for a loop!  I had wracked my brain all week and couldn't come up with a thing to write about!  I mean, I have all the usual sources:  census, birth and death records, marriage records, books, cemeteries, cousins, etc.  None of that is unusual.  So last night, I went through others' posts about this topics, my past posts, and even my source citations in FTM to try to find something to jog my brain.  Finally, I came across something I had forgotten about.  It's not a big thing, but it is definitely unusual.

My brother, Harry, is 20 years older than me.  My father and his mother divorced when he was very young, so he and my dad were not always very close.  Harry came in and out of our lives infrequently, usually only when he wanted or needed something from my dad.

However, his first wife, Diane, the mother of Harry Jr and Missi, did a better job of staying in touch.  She loved my dad very much and tried as best she could to allow him to see the grandchildren as much as possible.  As a matter of face, the kids usually spent their summer vacations and Christmas breaks with us, rather than their father.  Because of those visits and the kids and I being so close in age, we were always close.  They were more like my brother and sister than nephew and niece.

Back in the late 1990's, my parents moved to Augusta and thereafter sold the house in Swainsboro that I grew up in.  I went down to help them clean the house out.  They had basically been living in two houses for years, so the Swainsboro house was still FULL.  That house had belonged to my maternal grandparents, so there were still many items there that had belonged to them, mixed in with items that belonged to my parents.  It was a huge undertaking, and I believe my father only gave us 3 days to clean it out.  And I say he gave my mom and me that amount of time to sort through a houseful of belongings because he didn't do anything.  Nada.  Zilch.  He did not help us at all, except to issue an order here and there.

Behind my dad's recliner in the living room was his corner desk that I can remember being with us as far back as the Jacksonville years.  It was not used except to collect miscellaneous items in its drawers that had no home anyplace else.  As I was cleaning out that desk, I came across a box of items that had belonged to Harry.  Now I have no idea why they were there and not with him.  Perhaps he gave the box to my dad for safe keeping and had forgotten about it.  It must have been one of those occasions where my father and Harry were not speaking to each other because when I asked my dad about it, he told me I could have the box.

Being the family self-appointed genealogist, this was a gift from heaven!  There were pictures of Harry's children that I had never seen before, some Marine emblems, and more that I don't even remember.  There was also this scrap of paper: 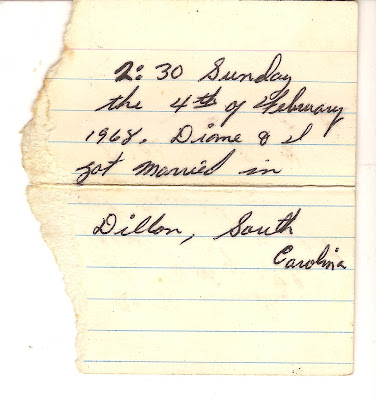 It actually looks like a torn index card.  I recognize my brother's handwriting so he is definitely the one who wrote it.  I have no idea why he would have felt the need to write this down so properly.  Was he afraid he would forget?  Did he mean to send it to someone in the family and never got around to it?  Or did someone ask for the information and again, he never gave it to them?  It must have been important for him to have held onto it for all those years, even after he and Diane divorced. I will never know the answers, I am sure, but it was definitely unusual.
I had never known the date they got married.  None of us knew they had gotten married in South Carolina.  They were both from the Jacksonville, Florida area and that's where most of their families were.  They must have eloped.  He was probably stationed at Camp Lejeune in North Carolina, because I do know that Harry Jr, who was born just 9 months later, was born in Jacksonville, North Carolina.  Neither Harry Sr nor Diane were underage.  So perhaps they just drove down one weekend to get married.  Maybe it was kind of a halfway place for them to meet to get married.  Again, I don't know.
So even an unusual source like a torn index card can give you a couple of answers and a whole lot of questions.
Posted by Liz at 12:33 PM