When I heard this theme, my first thought was quite literal:  Power, as in electrical power.  The reason for this is I remembered finding the easements for right-of-way filed in the Johnson County, Georgia Deed records for my grandparents, Lusion K Tapley (1870-1935) and Nealie V Drake Tapley (1895-1970).  They signed these easements over to Georgia Power Company for them to run electrical lines and put up electrical poles on my grandparents' land for the Dellwood-Wrightsville lines. 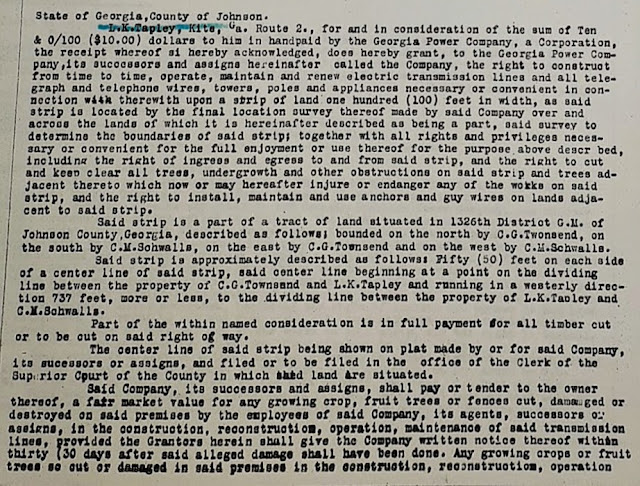 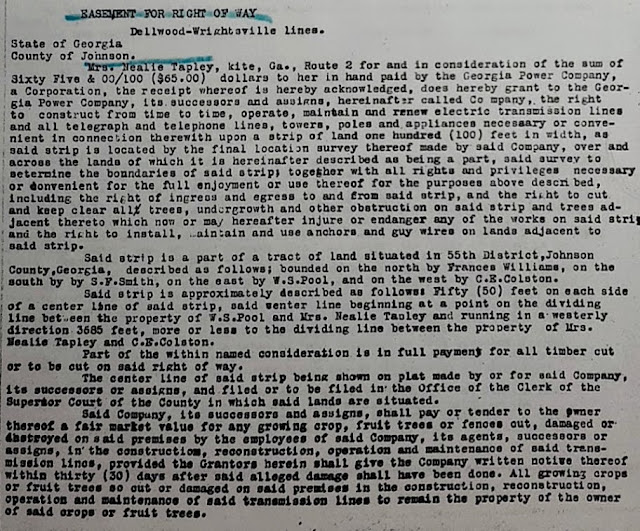 Evidently, my grandparents owned two pieces of land.  One was in Lusion's name, located in the 55th GM District,  and the other in Nealie's, located in the 1326th GM District.  His parcel must have been quite small because Georgia Power only paid him $10.00 for the right-of-way "upon a strip of land one hundred (100) feet in width."  Whereas Georgia Power paid Nealie $65 for the same sized strip across her land.

These deeds were recorded on June 11 and June 16, 1927, respectively.  So that is when electric lights came to Johnson County.  All of my grandparents' neighbors granted the same basic easement right-of-way, being paid varying amounts depending on the size of their land.

One of Lusion's neighbors, whose land his bordered, was C.M. Schwalls, the brother of Lusion's second wife, Mattie Schwalls.  One of Nealie's neighbors was W.S. Pool, though already passed by this time, who was the father of Lusion's sister-in-law, Reida Mae Poole.  Reida Mae was married to his oldest brother, James "Fella." (The W.S. could have also referred to Reida Mae's brother.  The land may have passed to him.)  Such is small towns (and counties!).

I recall the day I found these while searching the Johnson County Courthouse for deed records.  I was in awe.  I've had electricity my entire life.  I had never given any thought about when electrical lines were first run across the land.  My father was born a year after these easements were recorded, and evidently he found it interesting also.  I remember him poring over them.  I can't say that during his childhood, my father always had electricity, because the family was poor, and electricity wasn't free.  But electricity was available in the area his whole life.  [I am sure this had an effect on him and is why he was so diligent in paying the power (or "light") bill on time or early throughout his life.]

We tend to take power for granted.  Folks moan and groan when it goes out for a few hours or even a few minutes.  But once upon a time, less than 100 years ago, my family did not even have electricity run to their house.  I am grateful every time I flip a switch.