This topic stumped me.  I have already written about the multiple men named Hosea in my Tapley tree.  We don't have twins in the family much.  We have no triplets that I know of.  I had finally thought of something... not a great something... but maybe I could have made it work.  Then I re-read what Amy had said about this topic... multiple marriages... wait.  This led to me to my Great Uncle Kenneth. 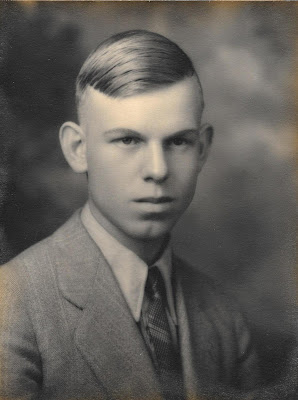 As far as we can tell, Kenneth was "different."  He was a wanderer, never stayed in one place very long.  He was uncommunicative; kept to himself.  He didn't keep in touch with his family.  Never had any children.  However, he was married five times.

I have researched the records many times for information on Kenneth's wives, but what I have is still sketchy.

His first wife was Alice Wright, birth and death dates unknown.  Kenneth was 24 years old when he married Alice in Yuma County, Arizona on September 4, 1933.  At the time, Kenneth was living in Calexico, California and working for the U.S. Postal Service.  He must have met Alice there because their marriage license states she lived in Calexico also. 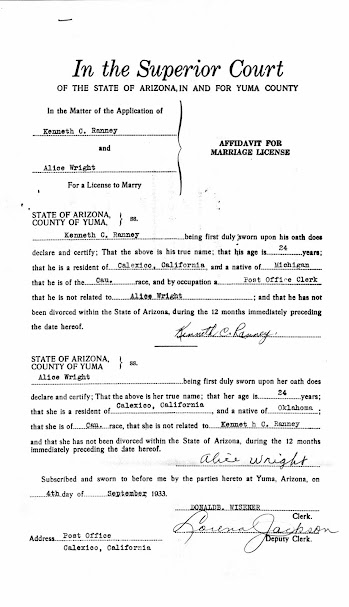 My grandmother wrote about this in her 1933 diary:

Monday, September 4: "Kenneth went home about 2 am. Kenneth got married in Yuma."

I stated then "This last sentence "Kenneth got married in Yuma." was written in a different pen...like it was added later. Probably the family did not know Kenneth was getting married or that he had gotten married until later."  He pretty much just showed up at his parents' house randomly and at odd hours.

At this time, my great-grandparents and their daughters were living San Bernardino County, California.  Calexico was way down south on the Mexican border, 161 miles away.  Today it's a 2 and a half hour drive.  Back then, it was probably closer to 3 or more.

Kenneth and Alice separated a short four months later on January 1, 1934.  My grandmother also mentioned this in her diary for that date:  "Kenneth & Alice split up." 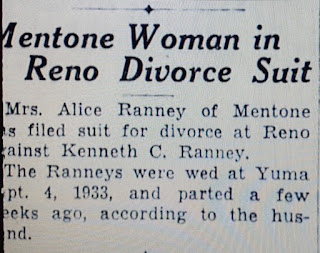 Kenneth's mother, my great-grandmother, supposedly said that she had never seen so much emotion expressed by Kenneth as the day he received his finalized divorce decree.  He actually jumped for joy.

Kenneth's second wife was named Muriel "Mona" Espy.  She was born abt 1905, so she was about 4 years older than Kenneth.  She was born in Oregon. They married some time between 1935-1938 and lived in Los Angeles. 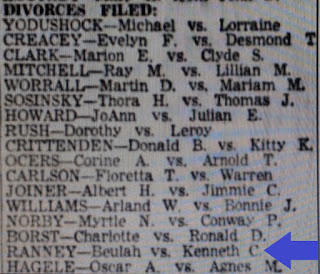 Kenneth's 5th and final wife was Eva Arnell Byrd (1909-2003).  They were married December 8, 1961 in Bristow, Oklahoma.  Eva was the sister of Kenneth's 3rd wife, Laura May Byrd and was also born in Charlton County, Georgia.  I don't know how they met, but they were living in Tulsa, Oklahoma in the early 1970's.  Eva visited us in Swainsboro once (yes, by herself).  Soon after, they moved to Fort Worth, Texas.
Either he was just getting too old and tired of marrying and divorcing or Eva was the one for him, as they were married until his death in 1989.
It seemed that Uncle Kenneth was searching for something amongst his multiple wives.  I hope he found it at last with Eva.
Posted by Liz at 7:52 PM