Amy Johnson Crow from Generations Cafe is hosting a blog writing prompt this year called 52 Ancestors in 52 Weeks.  Since I need a swift kick in the you-know-what to get me blogging more regularly again, I thought I'd jump in.  I like that she gives us "permission" to interpret the prompt however we wish and share it however we wish.  It doesn't have to be a blog post; it could be a family video, a letter to a child or grandchild, an e-mail, etc.  I'm probably going to be always behind on this exercise so don't go by the date and week I'm writing about and take it as accurate.  Like I am jumping back MONTHS for this post.  I knew I would never keep up.  LOL.

When I saw this particular theme, I immediately thought of our closest family friends, Colene and Robert and their kids.  I have known them since I was a baby.  Literally.  We have eaten with them too many meals to count.  We have vacationed with them.  I have slept in their house.  Exchanged countless letters with Colene after I grew up and moved out.  Still go to visit them when I'm in town.  We never run out of memories to talk about.  My picture is on display in their house.  Our lives have been entwined for as long as I can remember.

The story is that my father was sitting in the Krystal, a fast food restaurant in Augusta, and drinking coffee, as was his custom.  (He sat at the Krispy Kreme and drank coffee while I was being born.  It was the 1960's.  Fathers weren't in the delivery room back then.)  It turns out that back in the day, Krystal had a counter where you could eat or drink coffee, as my dad was doing.  Colene was a waitress there.  She fainted or passed out, and my father caught her before she hit the floor and hurt herself.  The families were friends from that moment on.

Colene has always been a character.  She's probably not even 5' tall, but her spunk more than made up for her size.  She was the only person I ever knew that stood up to my father.  I can remember her making sandwiches at a picnic and her telling my father that he could "eat it or do without."  I was in awe of her.  She's been known to do wild things to prove a point to her teenage children.  I don't think I should describe them here, but trust me, they were wild.  Robert was the rock.  Easy going and kind.  The typical good father staying in the background.

Robert and Colene lived over just over the state line in South Carolina, in an area called "The Valley." It's an area between Augusta and Aiken full of small towns such as Clearwater, Bath,  Burnettown, Gloverville, and Warrenville.  We lived in Augusta, about 20 miles away.  They have four children, one boy and three girls, and all of them older than me.  Becky, the youngest, is nine years older than me.  They spoiled me.

One of my earliest memories of them was when they picked me up to take me to Six Flags with them.  I was probably about 3, and I remember screaming and crying about going with them and leaving my parents.  That's all I remember of that trip.  Colene said that I didn't say a word for a long time, and then they passed a burned out car along the highway, and I piped up and said, "That car boke."  I was fine after that and had a great time apparently.  That was 50 years ago.

The next memory I have is visiting their house and standing on the front porch eating a cookie.  Again, I must have been about 3 years old.  My father was just on the other side of the screen door, talking to Robert.  They had a pony named Blackie.  Blackie was a mess.  He would eat clothes off the clothesline, follow them around like a dog, and while they had him tied to a salt block so he wouldn't wander off, he would just drag that block around the yard like it was nothing.  So this particular day, Blackie wandered over to see what I was doing, and my cookie looked appetizing.  He just came on up the steps onto the porch to try to get my cookie.  I freaked out and was screaming my head off.  I have never seen my father move so fast.  When he saw what had happened, everyone got a good laugh out of it, and we still talk about it today.

The next memory I have is when their house burned to the ground.  I remember going through the ashes with the girls looking for items to salvage.  There wasn't much.  Then I remember visiting their new house, and it's the house they still live in today.

We moved to Jacksonville, Florida.  I don't remember how much we saw them during those four years, but I'm sure we did.

When I was 8, we moved to Swainsboro, an hour and a half away from them.  Some Sundays, we would drive up to Colene and Robert's house and have lunch with them.  If Daddy was in the right mood, we would also get to stop at Sears in Augusta and go shopping.  Lots of times, Mom, Colene and I would go shopping at the pharmacies on Sunday afternoon.  South Carolina had blue laws for many years, so the only things open on Sundays were pharmacies such as Eckerd's.  Those were good days.

We've been to Florida with them.  I don't remember that trip, but there are pictures. We've been camping with them.  I don't remember that trip either, but there are home movies of it.  We have been to North Carolina with them.  Colene's dad used to live in Lenoir, and we visited him.  We also went to Grandfather Mountain, Chimney Rock, and Lake Lure.  We spent birthdays with them.  Thanksgivings.  Christmases.  No matter where we moved, we still visited them.  Colene's niece, Angela, would stay with us.  My niece and nephew, Missi and Harry, would go along with us on trips with Colene and Robert.

I cannot imagine my lifetime without Colene and Robert being in it.  She never missed my birthday or a holiday until she has gone into her 80's.  My father, being who he was, would have falling outs with them, but we always made our way back together.  I visit them when I can, but it's usually only once a year now.  I should call and visit more.  Colene has a lot of health problems and doesn't leave the house much anymore.  Robert is still the rock, keeping things going.

I don't know that we chose them as family.  The choice, I think, was made by a higher power that knew these two families should be together.  However, they are family.  Always will be. 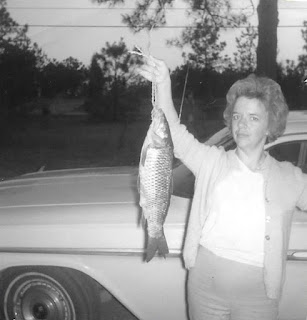 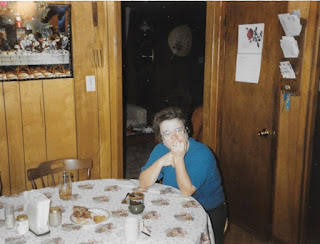 Colene in the 1980's at her kitchen table.  Many, many meals and
desserts eaten there over the years. 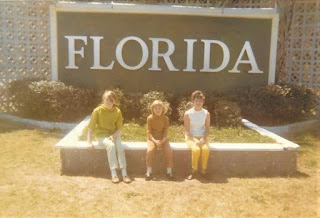 Robert and Colene's girls on our Florida trip.
Faye, Becky, and Vickie 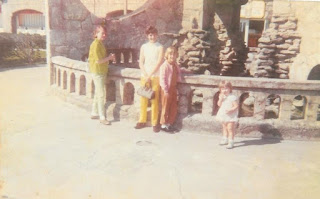 The girls and ME (the little one on the right) in Florida. 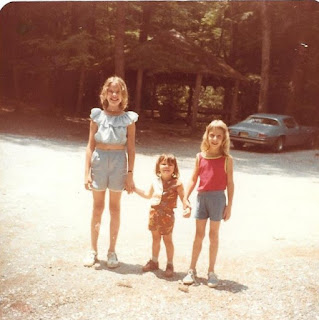 Me on the left (about age 13), Robert and Colene's
granddaughter, Dana, and Colene's niece,
Angela on the right at Lake Lure, North Carolina, 1980 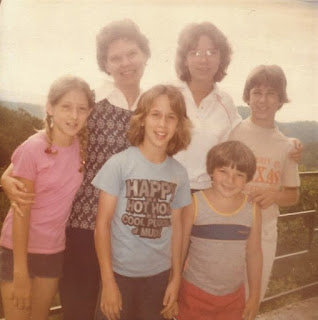 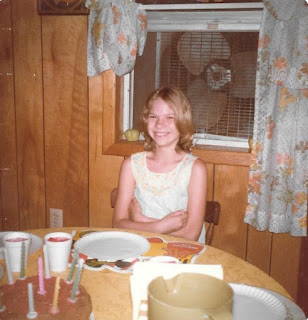 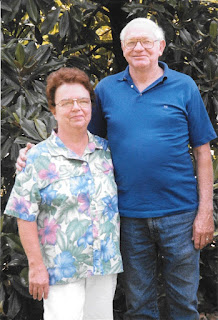